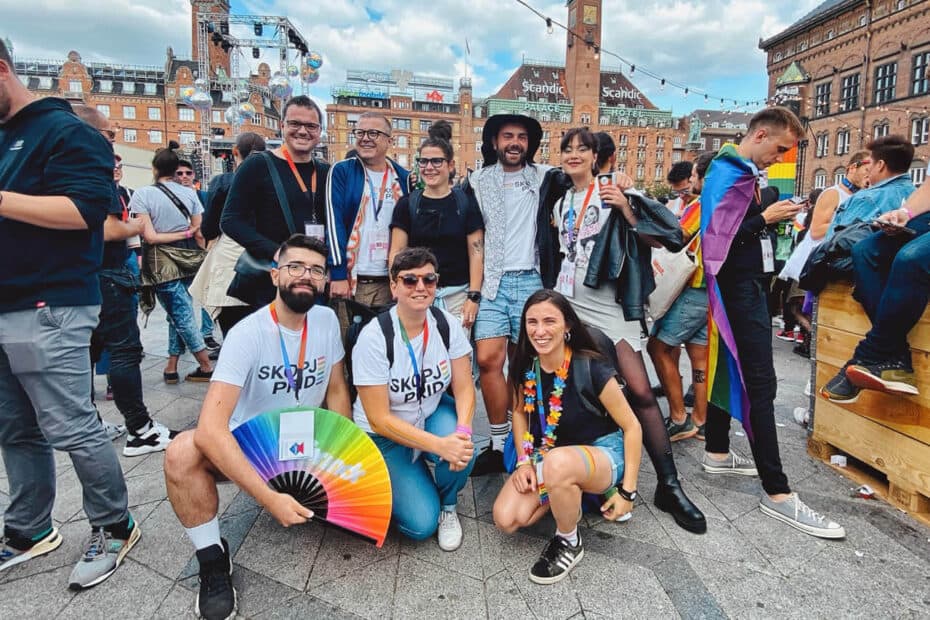 Last week, between August 16th and 21st, 2021, activists from several civil society organizations working for the promotion of human rights and behind the organization of Skopje Pride, as well as MPs from the Inter-Party Parliamentary Group in the Assembly of the RNM for the Promotion of the Rights of LGBTI+ People, participated in the International Conference on Human Rights in Copenhagen, Denmark and the Summit on Borders, Refugees and Immigration in Malmo, Sweden, in the framework of “World Pride 2021”. In addition to participating in these two events, activists and MPs marched at the 2021 World Pride Parade in Copenhagen.

The events around the World Pride 2021 were attended by the MP from VMRO-DPMNE – Timcho Mucunski, Deputy Coordinator of the Inter-Party Parliamentary Group, Ljupco Prendjov from GROM, Monika Zajkova from LDP, Snezhana Kaleska-Vancheva from SDSM and the coordinator Maja Morachanin from DOM gave a speech at the International Conference on Human Rights.

The focus of these events was the human rights of LGBTI­+ people around the world, with a special focus on endangered LGBTI+ people in countries such as Poland, Hungary, and Russia, and many of the workshops addressed intersectional discrimination against people who, in addition to their LGBTI identity, belong to other marginalized groups, e.g., racial and ethnic minorities, refugees, immigrants, youth, etc.

By participating in such conferences and Prides, the visibility of the LGBTI+ community from Macedonia increases, i.e., the priority problems faced by the community are emphasized, cooperation is established with representatives of various organizations and institutions, in order to transfer those experiences to us and to be more courageous in the promotion of the rights of LGBTI+ people in Macedonia.

Speeches during the Copenhagen International Human Rights Conference, as well as those during the Refugee, Immigration and Borders Summit, showed strong declarative support from international organizations such as the EU and the United Nations, and advocacy for promotion of the access to human rights and freedoms of people who are part of the LGBTI+ community. We expect that the political representatives from Macedonia, and especially the opposition, will actively advocate for the promotion of the status and rights of all LGBTI+ people, will promote such efforts in their speeches both in parliament and in public, will pass the Law for Personal Records for legal gender recognition, and will strive for effective protection of victims of hate crimes and hate speech and proportional sanctioning of perpetrators.

Skopje Pride 2021 – A liberating leave beyond the walls

We expect a safe and successful Skopje Pride